"From Ocean to Ocean" Czestochowa Icon

The pilgrim icon of Our Lady of Czestochowa braved -10 degrees Celsius (14 degrees Farenheit) to participate in the 41st March for Life in Washington DC. The "From Ocean to Ocean Campaign in Defense of Life reached the shores of North America five months ago, and has already traveled 10,000 miles (16,000 kilometers) in an effort to recover a culture of life.

Members of the Knights of Malta and leaders of Human Life International escorted Our Lady, as did the international coordinators of the From Ocean to Ocean Campaign, Ewa and Lech Kowalewski. 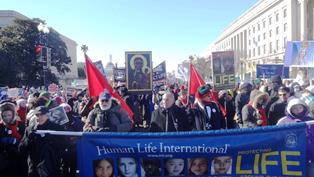 At the end of the March for Life, in front of the U.S. Supreme Court where the fateful 1973 decision legalizing abortion was made, a group of Polish-American young people spontaneously sang the Polish hymn "Black Madonna."

Attendance at the March was down somewhat due to the extreme cold and the previous day’s snow, which caused the cancellation of many flights and buses from the surrounding region. Yet there were still estimated to be about 300,000 marchers who came to protest the fateful 1973 Roe v. Wade decision. The frigid weather was tempered somewhat by the cloudless sunny day, and hearts aflame for greater respect for life. 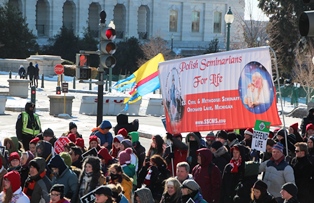 Those who attend the March for the first time are always struck by the majority of youth who are present, those who have survived the legalization of the destruction of unborn children.

Held every year on or about January 22, the March for Life’s largest contingent is young people who shout, sing, dance, play the drums, and wave banners and flags. University, high school, church and other groups are identified by matching, colorful hats and scarves. There are families, groups of persons with disabilities, religious orders, priests and bishops; people of many races and religion. To see the broad width of Constitution Boulevard stretch for a mile, filled from side to side with Marchers is a sight to behold.  The March is also a great opportunity for leaders to meet and discuss strategies and recognize accomplishments. 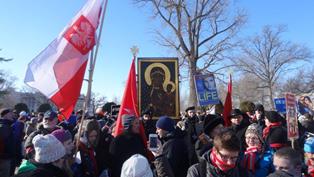 It is now two years since the dedication of the "From Ocean to Ocean" pilgrim Czestochowa icon at Jasna Gora monastery in Czestochowa, Poland. Since then she has traveled the equivalent of two trips around the Equator, though she still has far to go. From the United States she will continue to Latin America, with an event to launch this next stage to be held in Phoenix, Arizona in November of this year. And the end of this pilgrimage is still far away. On November 1 the Icon will travel from the United States. From there it is hoped that she will continue to Africa and Southeast and Central Asia before returning home.

Ewa Kowalewska
International Coordinator of the pilgrimage
0
We use cookies