Homily at the Grotto of Our Lady of Lourdes in Emmitsburg, MD. - Fr. Frederick

There is a woman who walks through the pages of the Old Testament from the beginning to the end – a woman described thusly in the Song of Songs: Who is she that comes forth as the morning rising, fair as the moon, bright as the sun, terrible as an army in battle array?” 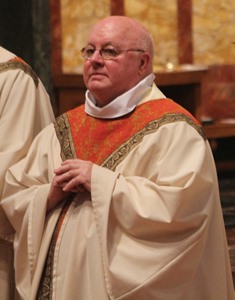 The phrase terrible as an army in battle array may cause some consernation. What exactly does it mean? The text is seemingly describing a beautiful, luminous woman who has the might of a fearsome army ready for war.

This woman appears on the first page of the Scriptures of ancient Israel. In cursing the serpent who had recently allured Adam and Eve into his revolt, God promises a woman who will be the mortal enemy of Satan:  I will put hatred between you, Satan, and the woman, between your seed and hers. You will strike at his heel and he (the seed of the woman) will crush your head (Gen 3:15).

Even though the identity of this powerful woman who is to come in the future is yet unknown in Genesis, she nonetheless walks resolutely throughout the twists and turns of salvation history.

We meet her in Tamar (Genesis 38:26; Ruth 4:12) and Rahab (Joshua 2:1-21; 6:17-25) and Jael (Judges 4:22; 5:24-26), in Naomi and Ruth (The Book of Ruth) and Bathsheba (1 Kings 1:11ff) – each fosters the continuation of the ancestry of the Messiah by acts of heroism for the Lord. All of these courageous women had love of God and zeal for the Covenant in common. Each of them performed heroic acts in favor of the People of Israel. Each was an enemy of the serpent who without respite sought to destroy Israel and shatter fidelity to the Covenant. Each in her own way struck a blow to the head of the serpent.

These woman of the Old Testament prefigured Mary, the Woman promised by God at the dawn of human history, the woman who is the mortal enemy of the serpent. The enmity of the Woman and the Serpent is most evident at the moment when Mary consented to have a baby – a child who would save Israel and all people from a culture of sin and death – a culture dominated by the influence of the serpent. By consenting to bring God’s Son into the world through her act of faith in God’s word and the surrender of her life to him, Mary crushed the head of the ancient serpent.

Then, thirty-three years later, standing in solidarity with Christ on Calvary, sharing in his suffering and assenting to his sacrifice, Mary experienced labor pangs as no woman has ever or will ever experience the excruciating pain of giving birth. Mary became the Mother of every human person redeemed by her son by her faith at the foot of the cross, her total abandonment to God, and her willingness to be taken up into the saving love of her crucified son. Drawing upon the grace of the Holy Spirit, Mary continued to believe on Calvary so that we, her children, might believe in spite of every hardship. She remained faithful to God’s plan so that we, her children, might remain faithful to the New Covenant throughout life and at the hour of our death.

From his cross, Jesus tells his mother and he tells us that Mary is not dying with him. Rather, in her perfect love for him she is giving birth to the new Israel, the new People of God: Woman, behold your Son! From that sacred moment on Calvary until the world’s last day, Holy Mary will be the solid defense of the people of God, the protector of the covenant sealed in the blood of her son:  Fair as the moon, bright as the sun, terrible as an army in battle array.

Again in our day Israel is in peril. The serpent continues to relentlessly attack the Bride of the Lamb. Our American society has been seduced by his lying rhetoric which is spawning a culture in which good is presented as evil and evil as good – a culture that exalts sterility and every form of sexual promiscuity, a culture that is now rejecting the marriage of a man and woman as the most fundamental unit of human society.  We have aborted millions of unborn children and insist that this murder is a woman’s reproductive rights. Contraception has become a way of life and soon we will witness the so-called mercy killing of the sick and elderly members of our society. With very little resistance, same-sex marriage will become the law of the land. Tragic to say, members of the Lord’s Church support and even promote these views with no censure from those entrusted with the care of souls.

Several years ago I spent Holy Week and Easter at the Shrine of Our Lady of Czestochowa in Poland. Praying before the miraculous icon, two things impressed me – the sadness of the Black Madonna and her strength! The struggle between the woman and the serpent is a long and exhausting fight. The agony that her son suffered as a result of human sin plays itself out in the ongoing battle between the seed of the Woman and the seed of the serpent at every moment of human history. The woman of sorrows stands at the heart of every fray as she stood at the foot of the cross. She stands with the Church, in the Church. She acts mysteriously through the Church. She stands as the sign and the instrument of God’s omnipotent grace. During all the dark years of Soviet domination in Poland, Czestochowa remained the center of the resistance to atheism, rank materialism and sin, the place where Mary’s children found strength to stand firm in faith and to be faithful to God’s law.

Into the midst of our decaying American culture comes the image of the woman who is the mortal enemy of the serpent. A blessed copy of the icon of the Black Madonna comes on pilgrimage to fight for the rights of her Son in the United States. How blessed we are to have her at Mount St. Mary’s University and Seminary and at the Grotto of Our Lady of Lourdes.

I beg each of you to open your heart to the Mother of God tonight. She is a mother who loves you. Ask Mary to drive out of your heart anything that does not belong to Jesus. Ask her to destroy any remnant of the culture of death that may be in you. Beg her to share her faith in Jesus with you as well as her rocklike fidelity to his every word.

The pilgrimage of the Black Madonna in our land will be silent and lowly. It will likely not attract any attention from the media or the great ones of our society.  This is the way of God and his mother. As the Icon of Our Lady travels from place to place there will be miracles of grace and even perhaps some miracles of nature. The strong, fearless woman is on her way to visit the little ones, to make them strong, to rekindle faith where it is weak, to defend the rights of her son, the Savior of all people, and to banish the culture of death from our land.

Tonight as the Mother of God of Czechochowa resumes her pilgrimage from ocean to ocean we beg her to show herself wheresoever she goes as fair as the moon, bright as the sun, terrible as an army in battle array!”