On April 7 this year the Divine Mercy Sunday the Czestochowa Icon traveling the world in her copy in defense of life, "From Ocean to Ocean", stood in the place of the apparitions of Fatima. In the first stage of the pilgrimage - from Vladivostok to Fatima – she traveled 65 thousand kilometers visiting 24 countries.

The ceremony began with a Sunday morning service in the Byzantine chapel of "Domus Pacis", the seat of the World Apostolate of Fatima. The liturgy was celebrated in the Eastern rite of the Greek Catholic Church. The peregrinating Czestochowa icon stood next to a place where for many years a famous icon of Our Lady of Kazan was exposed, the one which was returned by Bl. Holy Father John Paul II to the Russian Orthodox Church. The ceremony was attended by many people in the majority of Ukrainian origin. 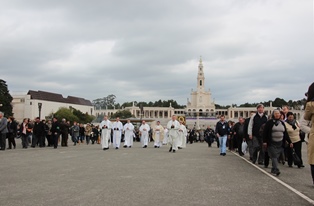 At 1:45 PM Our Lady of Czestochowa in her "Life mobilu" entered the square at the Shrine of Fatima in the vicinity of Little Chapel of Apparitions and stood next to the statue of Our Lady of Fatima.

AT 2:00 PM the Rosary for the intention of the defense of life began led by Bp. Wieslaw Mering, together with a group of priests from the Diocese of Wloclawek - Poland. He was accompanied by Monsignor Andrew Steckiewicz, vicar general of the Minsk-Mogilev Archdiocese from Belarus. Pauline Monastery of Jasna Gora was represented by Fr. Wlodzimierz Ogorzalek OSPPE. the Rosary in Portuguese was led by Fr. Francis, representing the Shrine of Fatima. Decades ware recited by representatives of the Portuguese pro-life movement, the Apostolate of Fatima, in English by John Smeaton from England and in Polish by the Ewa Kowalewska from Poland. After the Rosary the Act of entrustment to Our Lady the Protection of Life and Civilization of Love was recited in Portuguese. Then with the bells ringing and a characteristic Fatima singing "Ave, ave, ave Maria" the Icon of Czestochowa passed in procession through the square to the new Fatima Basilica of the Holy Trinity, where a Solemn Mass was celebrated which was attended by about three thousand people of different nationalities.

Veneration lasted till 8:30 PM. All the time there was a long queue of people who wanted to come face to face with the Mother of God, and " touch " the icon.

The day before, on Saturday, April 7 representatives of the pro-life movement, who carried the Icon in their countries. met at the seat of the World Apostolate of Fatima. At the meeting, 14 countries were represented, the leaders of the other countries stay in touch, but could not come in person. All agreed that the Mother of God has prepared the biggest pro-life international campaign ever and expressed the hope that soon the next stage in America will start. The participants made a decision to transform the Organizing Committee into the “International Coalition from ocean to ocean with Mary in Defense of Life”.

On Monday, April 8, 2013 The Sanctity of Life Day the Icon will stop at the Atlantic Ocean, which will complete the first stage of the pilgrimage. Holly Mass is planned on this occasion in coastal Nazaré, in the sanctuary of Our Lady of Nazareth at 10:00 AM. Than the Icon will go to the oceanfront.

Coordinator of the pilgrimage