A temple promised to the Virgin of Czestochowa

On May 13, 1981, Holy Father St. John Paul II toured St. Peter's Square in his papamobile blessing the faithful who gathered there. No one imagined that a renowned gunman would try to assassinate the Pontiff threatening his life.

Prayers to God and for the intercession of Blessed Virgin Mary for the life of the Vicar of Christ spread throughout the world. In Guayaquil, the archbishop at the time, Bernardino Echeverria Ruiz OFM wanted to offer something special. He would build a temple to Our Lady of Czestochowa if the Holy Father would be healed.  St. John Paul II survived!

The Archbishop saw through the media, a group of Polish pilgrims who had arrived at St. Peter's Square carrying an Icon of Our Lady of Czestochowa, Patroness and Queen of Poland,  who in the bewilderment and shock  placed the Icon in the chair from which St. John Paul II was going to speak and began to pray before Her with much devotion and faith.

Monsignor recalls, already as Apostolic Administrator of Ibarra in a letter dated 1993:

“When in Ecuador we learned about the criminal attack, we also felt a deep pain and everyone began to pray for the health of the Holy Father. Moved by such incredible news, I went out to the atrium of the Cathedral and there with a large group of people from Guayaquil we united everyone's prayer, asking God to save the Pope. In that moment of anguish and faith, having a large group of faithful before me, I raised my voice and said: `Virgin of Czestochowa, loving Mother of Holy Father, save his life! I, on behalf of Guayaquil, I promise to you that, if you save the Pope, I will build you a temple in our city of Guayaquil.”

Building a church is not an easy task, but in this case things were happening in an almost miraculous way. Saint John Paul II, knowing the promise of the archbishop, gave the Icon for the main altar, an icon that had been given to him by a Polish artist, possibly just the same as the group of Polish pilgrims had placed in their petrine chair.

Then, the collection of donations was something particular. A false rumor had spread that Mons. Echeverria was going to resign, and a farewell was organized, so this pretext was used to raise funds. But the most surprising thing was when,  contacting a Catholic of the Eastern rite  who had a great devotion to the Virgin of Czestochowa, he said openly that he did not give any contribution to the cause, “but if the archbishop wants me to build the temple, I I will do it without anyone's help”, he said to everyone's amazement. So it was.

Holy Father visited the temple on January 31, 1985, during his four-day trip to Ecuador, in which he dedicated the church to the Virgin of Czestochowa, Patroness of Poland the Queen  of his homeland. 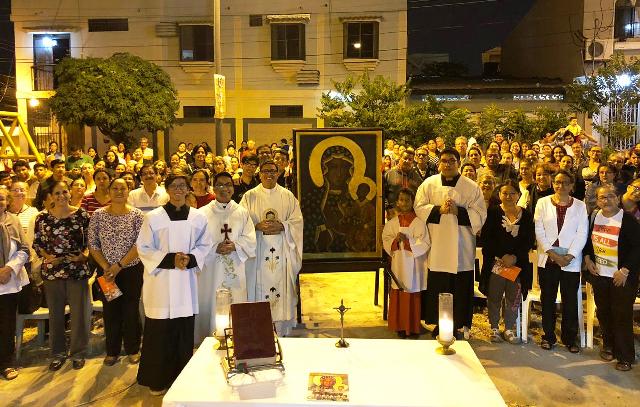 This Monday, August 26, is the feast of Our Lady of Czestochowa, and the Pilgrim Icon is right there. During the novena, the Icon has toured some of the sectors that are part of the parish and they will have a great party in his honor. On the afternoon of Monday 26, the prayer of the Holy Rosary is foreseen before the Holy Mass, and then a lively Mariana music show ending with fireworks. 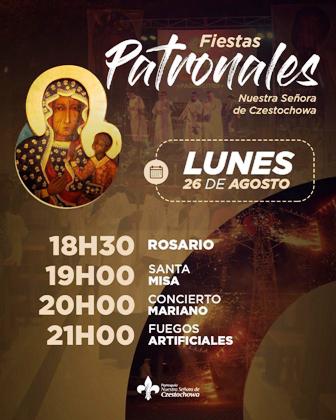