On Wednesday, September 4, the Pilgrim Icon arrived at the Mary Mother of the Church Parish.

On Thursday night, after Mass, the Pilgrimage coordinator in Guayaquil made an explanatory talk about the importance of the Icon and the reason for its arrival in the country, inviting those present to ask Our Mother for the women who are thinking of abortion,

for life of the unborn and for the restoration of family values, at the moment in which laws in favor of abortion and gender ideology are being debated in the National Assembly of Ecuador. At the end of the talk, some prayer cards were distributed with the image of the Icon and the prayer of Saint John Paul II from the encyclical Humanae Vitae that everyone recited together. On Saturday morning, as it was the first Saturday of the month, the Rosary of the Aurora was held at 6:00, in a procession from the Mary Mother of the Church Parish to the Monastery Carmen of Child Jesus that is located in the same district. Nearly 50 parishioners, accompanied by the pastor, Fr. Francisco Sojos, were praying the Holy Rosary and singing songs at the aside of  the Virgin next to the Pilgrim Icon. Once the procession reached the Chapel of the Carmelite sisters, the Holy Eucharist was offered.

On Sunday the 8th we celebrated the Nativity of the Blessed Virgin Mary. In the Holy Mass of 11AM a group of 30 people from the parish were consecrated to Jesus in Mary, organized by the group Lazos de Amor Mariano after nine months of preparation according to the True Devotion to the Blessed Virgin of Saint Louis-Marie Grignion de Montfort. It was very emotional to see the consecrated all dressed in white pronouncing their vows. 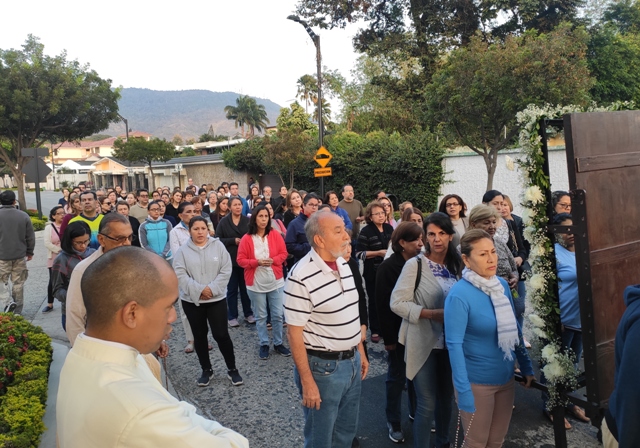 At the end of the celebration, and to celebrate with music the nativity of Virgin Mary, the group named  "Winds of the Pacific" was presented and delighted every one, dedicating its music playing on wind instruments such as the clarinet, oboe, flute, bassoon and horn, music that.