A victory of life

Tuesday, September 17 was a great day in Ecuador. The National Assembly, after years of postponing the vote on the reforms to the Organic Integral Criminal Code (COIP) of Ecuador, rejected the decriminalization of abortion for cases of rape, incest, non-consensual insemination and malformation of the baby in the womb, including until the ninth month of gestation. 70 votes were needed to legalize abortion, but they only reached 65. The reform did not take place.

Prolife from all over the country mobilized in buses to reach the capital and be able to support the assembly members who were in favor of life. The Icon of Our Lady of Czestochowa was also present. Vanessa Mejia, the Saint Albert The Great Parish catechist, graciously lent her vehicle to travel from Guayaquil to Quito (almost 8 hours of driving), and arrived before the vote that was scheduled at 5:00 p.m. “During almost all the way we saw how Traffic Police of Ecuador stopped cars for inspection, but we were invisible. The best thing was that when we arrived at the parliament building, the Virgin Mary had reserved a parking right in front of it, so we could take the Icon out of the car without any inconvenience”, says Vanessa. 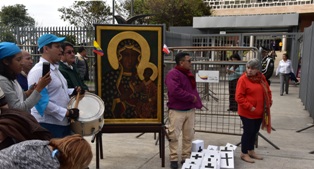 With the permission of the police guarding the place, they placed the Icon right at the entrance of the Assembly, in this way, everyone who entered had to meet Her gaze. There She was protected by members of the San Juan XXIII movement and the Laity Councils, while the assembly members voted and Bishop Alfredo Jose Espinoza, Archbishop of Quito and Primate of Ecuador, offered mass on the street.

The weather in Quito is very unstable at this time of the year, and clouds with a threat of rain were visible. But everyone began to pray the rosary and the sun came out. The victory was ours, or rather our Heavenly Mother. The prolife group outnumbered abortion groups, but as it happens on many occasions, they are more visible to the media. Father Leon Juchniewicz, a Polish missionary residing in Santo Domingo for more than 30 years now, also accompanied the Icon, and was present when the group in favor of abortion lit torches and threw them. “It's a shame to see those women. They are not aware that their mothers gave them life and now they want to have the right to kill.” 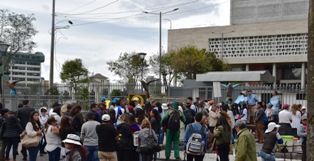 Vanesa recognizes the hand of Mary in all this: “Prayer can do everything. I attribute this miracle to the Virgin of Czestochowa because I know the immense faith that the Polish people have for Her, She has never let them down and it is a blessing to be with Her today. Now we must pray more intensely, bend the knees at the feet of the Blessed Sacrament because the prolife struggle continues.”

Upon hearing the result of the vote, a  Thanksgiving Eucharist in was offered outside the National Assembly. This time they placed the Icon behind the priests and in front of the assistants. Mons. Danilo Echeverria, Auxiliary Bishop of Quito celebrated Mass with Fr. Leon Juchniewicz and 6 other priests.

The joy was immense, this is a battle won, but much remains to be done. May Mary Most Holy have Ecuador in Her hand, this country that was the first to be consecrated to the Blessed Heart of Jesus on March 25, 1874 and to the Immaculate Heart of Mary on July 9, 1892, will never be unprotected. 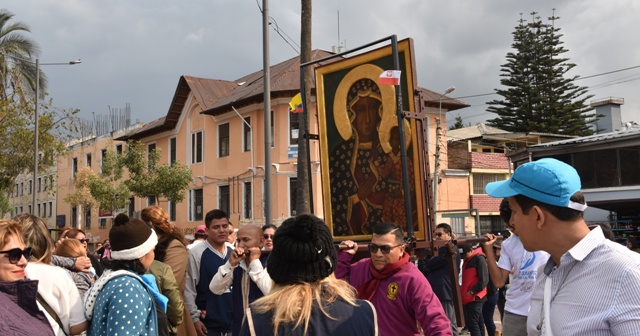