The Pilgrim Icon of Our Lady of Czestochowa arrived at the Parish of Saint Albert The Great, in the Daule canton, on Sunday morning, at the end of the Intensive Week of Prayer for the Life of the Unborn, which took place from September 8 to 15, since the archbishop of the Archdiocese of Guayaquil, Mons. Luis Cabrera, had requested more prayer so that no laws were passed in favor of abortion.

Saint Albert The Great is a relatively new parish. There are still certain areas under construction, but the faithful, led by their pastor, Fr. Alfonso Aviles, are doing a great job integrating all the communities in the sector. At the doors of the temple there were people receiving signatures to ask the National Assembly not to legalize abortion; another group sold food to raise funds to complete the building of the church; and in different parts groups of catechists gave talks.

At 11 AM, the pilgrimage coordinator in Guayaquil was able to give an explanation about the Pilgrim Icon and its importance, remembering that this same image was present in certain abortion centers in the United States, and that some of them are closing. Then, the vicar, Fr. Felipe Alvial presented the Blessed Sacrament and prayed the Holy Rosary. After that, he celebrated the Holy Eucharist, offering it for the assembly members so that they do not legalize abortion. During his homily he mentioned that the Black Madonna is also the Queen of Poland and recalled that the "Little Virgin", as he treated Her with great affection, was present comforting the Polish people in very hard communist times. 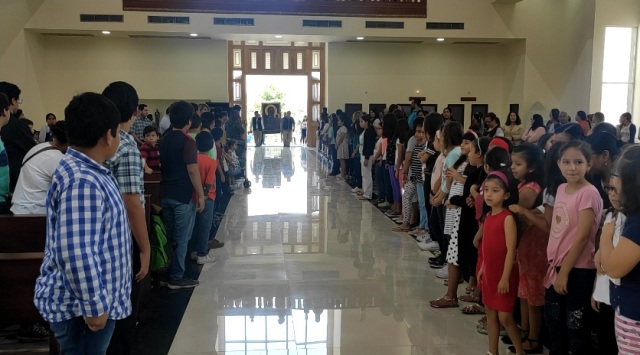